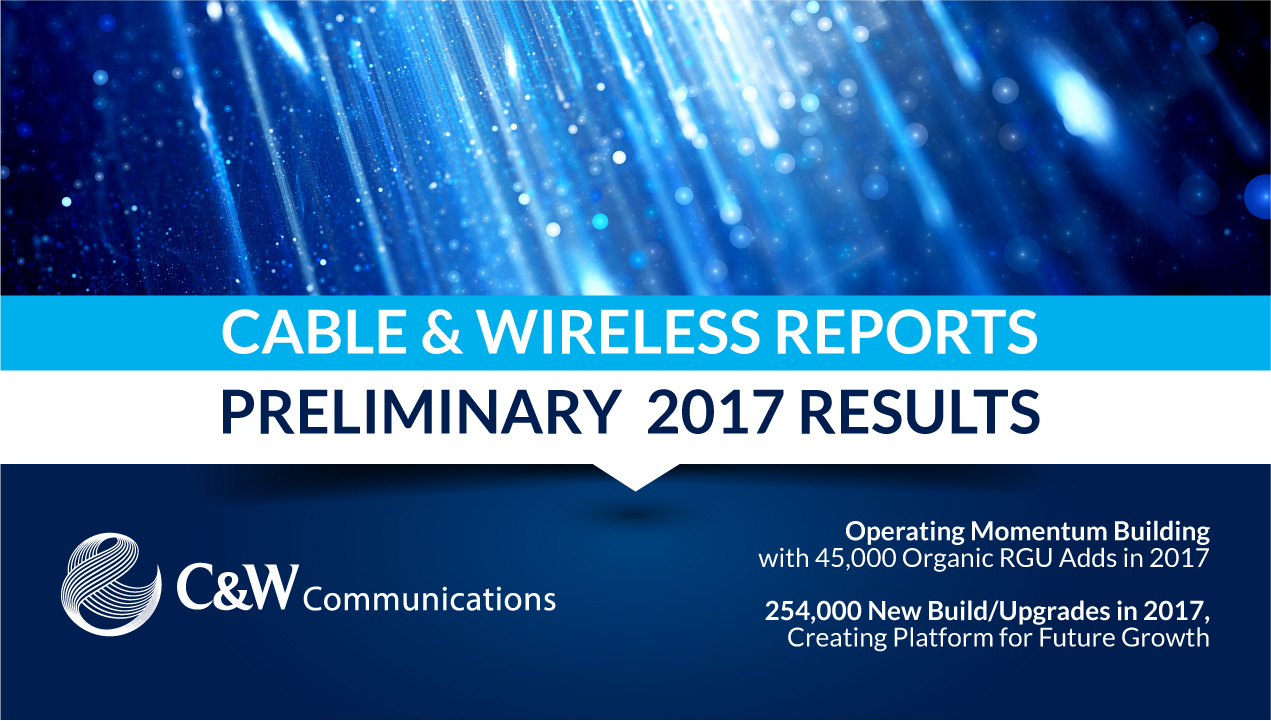 MIAMI, Feb. 15, 2018 (GLOBE NEWSWIRE) — Cable & Wireless Communications Limited (“C&W”) is a leading telecommunications operator in its consumer markets, which are predominantly located in the Caribbean and Latin America, providing entertainment, information and communication services to 3.4 million mobile, 0.6 million internet, 0.6 million fixed-line telephony and 0.4 million video subscribers. In addition, C&W delivers B2B services and provides wholesale services over its sub-sea and terrestrial networks that connect over 40 markets across the region.

During September 2017, Hurricanes Irma and Maria caused significant damage to our operations in certain geographies within C&W, including the British Virgin Islands and Dominica, and to a lesser extent Turks & Caicos, the Bahamas, Anguilla, Antigua and other smaller markets, resulting in disruptions to our telecommunications services within these islands. With the exception of the Bahamas, all of these C&W markets are included in the “Other C&W” category in the accompanying table. Homes passed counts for the British Virgin Islands, Dominica, and Anguilla reflect the pre-hurricane homes passed as of August 31, 2017. As of December 31, 2017, services to most of our fixed-line customers have not yet been restored in the British Virgin Islands, Dominica and Anguilla. While mobile services have been largely restored in these markets, we are still in the process of completing the restoration of our mobile network infrastructure.

Liberty Latin America Ltd. (“Liberty Latin America”) is a leading telecommunications company operating in over 20 countries across Latin America and the Caribbean under the consumer brands VTR, Flow, Liberty, Más Móvil and BTC. The communications and entertainment services that we offer to our residential and business customers in the region increasingly include combinations of services comprised of digital video, broadband internet, telephony and mobile services. Our business products and services include enterprise-grade connectivity, data center, hosting and managed solutions, as well as information technology solutions with customers ranging from small and medium enterprises to international companies and governmental agencies. In addition, Liberty Latin America operates a sub-sea and terrestrial fiber optic cable network that connects over 40 markets in the region.

Liberty Latin America has three separate classes of common shares, which are traded on the NASDAQ Global Select Market under the symbols “LILA” (Class A) and “LILAK” (Class C), and on the OTC link under the symbol “LILAB” (Class B).