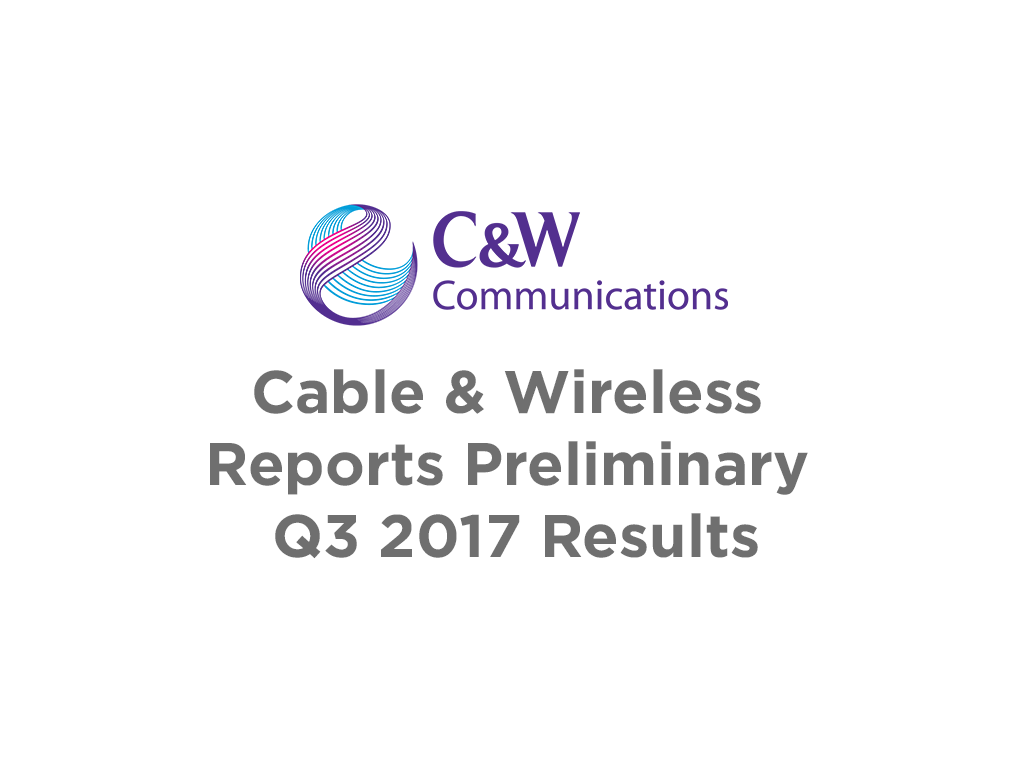 MIAMI, FL – November 2, 2017 – Cable & Wireless Communications Limited (“C&W”) is a leading telecommunications operator in its consumer markets, which are predominantly located in the Caribbean and Latin America, providing entertainment, information and communication services to 3.5 million mobile, 0.4 million television, 0.6 million internet and 0.6 million fixed-line telephony subscribers2. In addition, C&W delivers B2B services and provides wholesale services over its sub-sea and terrestrial networks that connect over 40 markets across the region.

On May 16, 2016, a subsidiary of Liberty Global acquired C&W (the “Liberty Global Transaction”). Revenue and subscriber statistics have been presented herein using Liberty Global’s definitions for all periods presented unless otherwise noted. Further adjustments to these metrics are possible as the integration process continues. Significant policy adjustments have been considered in our calculation of rebased growth rates for revenue. For additional information on Liberty Global’s definition of rebased growth rates, see footnote 5. In addition, effective for the 2016 fiscal year, C&W changed its fiscal year end from March 31 to December 31 to conform with Liberty Global.

Update on Impacts of Hurricanes Irma and Maria:

3             RGU is separately a Basic Video Subscriber, Enhanced Video Subscriber, DTH Subscriber, Internet Subscriber or Telephony Subscriber (each as defined and described below). A home, residential multiple dwelling unit, or commercial unit may contain one or more RGUs. For example, if a residential customer in our Austrian market subscribed to our enhanced video service, fixed-line telephony service and broadband internet service, the customer would constitute three RGUs. Total RGUs is the sum of Basic Video, Enhanced Video, DTH, Internet and Telephony Subscribers. RGUs generally are counted on a unique premises basis such that a given premises does not count as more than one RGU for any given service. On the other hand, if an individual receives one of our services in two premises (e.g., a primary home and a vacation home), that individual will count as two RGUs for that service. Each bundled cable, internet or telephony service is counted as a separate RGU regardless of the nature of any bundling discount or promotion. Non-paying subscribers are counted as subscribers during their free promotional service period. Some of these subscribers may choose to disconnect after their free service period. Services offered without charge on a long-term basis (e.g., VIP subscribers or free service to employees) generally are not counted as RGUs. We do not include subscriptions to mobile services in our externally reported RGU counts. In this regard, our September 30, 2017 RGU counts exclude our separately reported postpaid and prepaid mobile subscribers.

Liberty Global is the world’s largest international TV and broadband company, with operations in more than 30 countries across Europe, Latin America and the Caribbean. We invest in the infrastructure that empowers our customers to make the most of the digital revolution. Our scale and commitment to innovation enable us to develop market-leading products delivered through next-generation networks that connect our over 24 million customers who subscribe to over 50 million television, broadband internet and telephony services. We also serve over 10 million mobile subscribers and offer WiFi service across 10 million access points.

The Liberty Global Group operates in 12 European countries under the consumer brands Virgin Media, Unitymedia, Telenet and UPC. The Liberty Global Group also owns 50% of VodafoneZiggo, a Dutch joint venture, which has 4 million customers, 10 million fixed-line subscribers and 5 million mobile subscribers. The LiLAC Group operates in over 20 countries in Latin America and the Caribbean under the consumer brands VTR, Flow, Liberty, Más Móvil and BTC. In addition, the LiLAC Group operates a sub-sea fiber network throughout the region in over 40 markets.